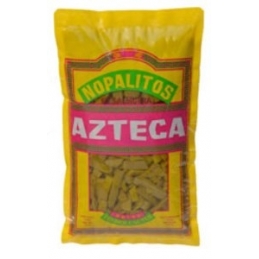 There is nothing that represents Mexicans more as a natural emblem than the nopales to such a degree that it is present on the shield of the flag of Mexico where the eagle is devouring a snake prostrate on the nopal, what a more Mexican scene than that. you will find in any flag. On the other hand, this food has its years, approximately 20,000 years when the collectors who arrived found a food source in this cactus. In Nahuatl the Nopal is said nohpalli and among the Chichimecas it became their main food. In Tenochtitlan, agriculture was directly related to the Nopal. The Nopal is original from the American continent, of all the cactus species that exist in the world in Mexico there are half. In Spain they can be found in Almería, the Canary Islands, Andalusia, Extremadura, the South of Castile and the Spanish Levante, popularly known as xoconostle, nopal or chumbera; its edible fruits, the tunas or prickly pears.

Nopalitos are healthy and different Mexican products that are cooked in different ways in traditional Mexican cuisine. Either roasted as a side or garnish or in a salad with tomato, onion, cilantro, chopped and salt, it is also low in carbohydrates and can help in the treatment of diabetes reducing blood sugar levels, as well as it is a vegetable with high fiber content, so it helps a lot in your intestinal flora.